Every year, the High School Concert Band and Wind Ensemble combine to form the “Dragon Marching Band”. The Swartz Creek Marching Band entertains audiences at every home football game with music and choreography.

The Dragon Marching Band is directed by Jean Murdock and Rachel Stevens.

In addition to home game performances, the Marching Band performs at the Crim Festival of Races in Flint, the annual Swartz Creek Homecoming Parade, The Swartz Creek Fireman’s Christmas Parade, Meet The Team Nights, Pep Assemblies, and School Concerts, as well as competing in the MSBOA District III Marching Festival. The Dragon Marching Band is growing both in size and talent, and is working on an award-winning season during this school year.

The Marching season begins in late July with the annual Band Camp. This camp is mandatory for all band members, is held at the High School, and is a rigorous yet fun way for the Dragon Marching Band to prepare for the upcoming season.

This ensemble includes students who place into the highest categories during auditions.The Wind Ensemble provides students with the skills to master difficult musical compositions, and entertains audiences at all concerts and band activities.

This lively group of musicians meets after the regular school day, as an official class, and must pass rigorous auditions twice per year to join the group.The Jazz Band consistently impresses audiences with their talent and enthusiasm.

The Pep Band performs at all home Basketball Games and help cheer our teams on to victory! This is an optional group which students sign up to play in. Students may do pep band in lieu of required reports for that particular marking period.

Swartz Creek Schools provides the opportunity for students to become involved in the instrumental music program beginning in the Sixth grade.Most students have the chance to be assessed for instrument selection at the end of the Fifth grade. All students in the Sixth grade band learn basic music concepts, how to read music, and how to use and care for their instruments.Seventh and Eighth grade students build on their skills, and learn more advanced playing and performing techniques.

Middle school band students participate in three concerts during the school year. Participation in District Band Festivals and Solo and Ensemble events is part of the Seventh and Eighth grade band experience.Eighth graders also march in the Homecoming Parade to gain experience before they join the Dragon Marching Band in High School.

The Middle School Jazz Band is a dynamic group of young musicians who practice after school, and learn some of the more “non-traditional” music styles.This group is a talented and fun ensemble, and they also participate in concert performances.

BAND ACTIVITIES:The Band Boosters organize instructional and social events for all of the school bands, and purchase awards, trophies and other recognition items for band students.

EVERYONE is welcome to participate in Band Booster activities!The Band Booster meetings are held on the last Tuesday of every month, at 6:00 p.m., in the High School Band Room.

You can find us here: 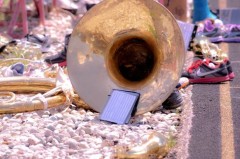 Ask to be a member of our
Facebook Group

You have installed an adblocker. This Web App can only be displayed and edited correctly when the adblocker is disabled.